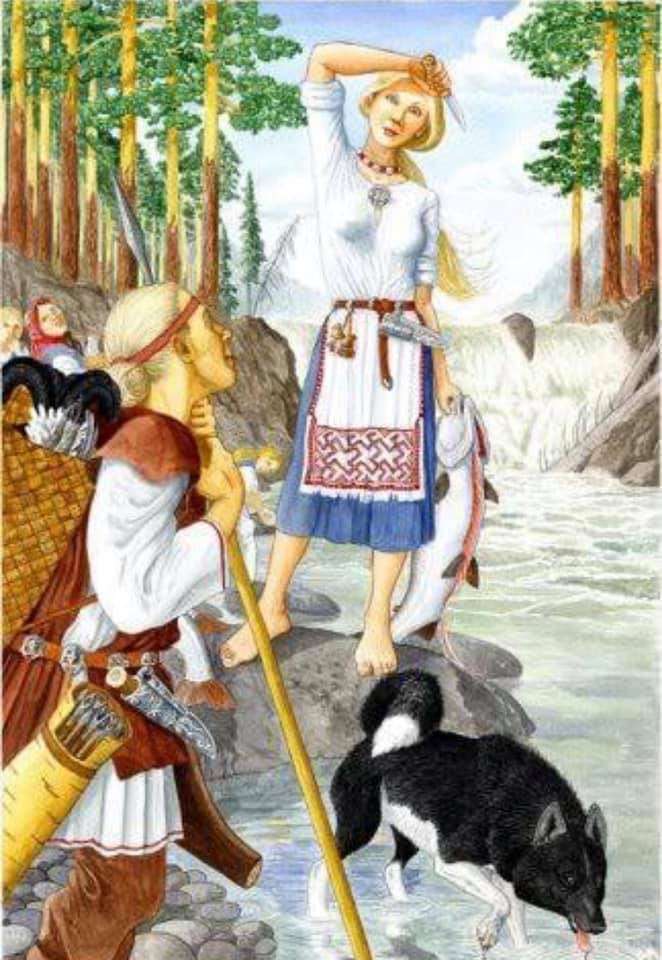 DATE OF PUBLICATION OF THE OFFICIAL VALID STANDARD

Hunting spitz. A dog mainly for elk and bear hunting, holds the game at bay.

The Komi dog, also called the dog of Zyrians, is considered to be the origin of the breed .However, the basic stock dogs originated from the Lagoda’s Karelia, Olonets and Russian Karelia, where they were used for all different types of game hunting. The breeding was started in 1936 with the goal to create a sturdy dog which barks at big game. Then it was agreed that the name of the breed is Karelian Bear Dog. The first standard was established in 1945. The first dogs were registered in 1946. Today the breed is common in Finland.

Viewed from the front triangular in shape, not very long.

Skull: Broad; viewed from the front and in profile slightly convex. Broadest between the ears. The frontal furrow is barely visible. The superciliary ridges are only slightly developed.
Stop: Not very pronounced, rather long, arched gradually towards the skull.

Nose: Large, black in colour.
Muzzle: Deep, tapering only slightly towards the nose. The nasal bridge is straight.
Lips: Rather thin and tight.
Jaws/Teeth: The jaws are very strong. The teeth are well developed and symmetrical; 42 teeth, according to the dentition formula. Close fitting scissors bite.
Cheeks: The zygomatic arches are well developed.
Eyes: Rather small, slightly oval. Brown of different shades. The expression is alert and fiery.
Ears: Erect, set rather high, medium sized with slightly rounded tips.

Muscular; of medium length, arched and covered with profuse hair.

Withers: Clearly defined, especially in males.
Back: Level and muscular.
Loin: Short and muscular.
Croup: Broad, strong and slightly sloping.
Chest: Spacious, not very broad, rather long, reaching approximately to the elbows. The ribs are slightly sprung; the forechest clearly visible, yet not protruding.
Under line and belly: Slightly tucked up.

High set, of medium length, curved over the back, the tip of the tail touching the body on either side or on the back. A natural bobtail is permitted and is of equal value to a natural long tail.

Light, effortless, covering a lot of ground. Changes easily from trot to gallop, which is the most natural gait. The legs move parallel.

Hair: Outer coat harsh and straight. On the neck, back and backside of the upper thighs longer than elsewhere. Undercoat soft and dense.

Colour: Black, may be dull or with nuances of brown. Most individuals have clearly defined white markings on the head, neck, chest, belly and the legs.

Any departure from the foregoing points should be considered a fault and the seriousness with which the fault should be regarded should be in exact proportion to its degree and its effect upon the health and welfare of the dog and on its ability to perform its traditional work.